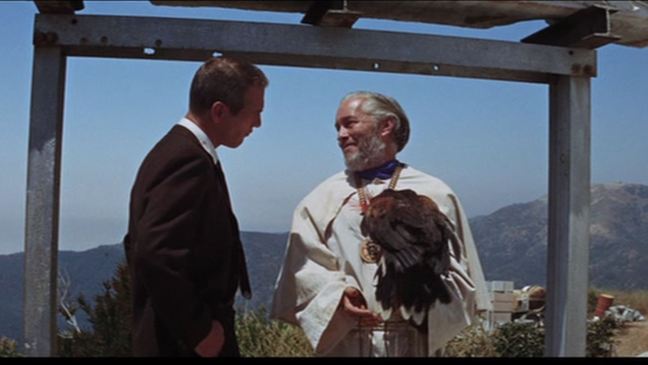 There is a bad joke here, but that’s just the way I roll sometimes. This project focuses on the work of Strother Martin, but sometimes his part in the film is a little flimsy so we may need to enhance the material a bit.  Harper is another Paul Newman vehicle, it was made right before “Cool Hand Luke” and it was the first of six collaborations with actor  Newman.

The film is a detective story from a Ross Macdonald novel. The film was written by the great William Goldman, and it tells a convoluted story of the kidnapping of a wealthy but somewhat crazy businessman. Newman is Lew Harper, (a change from the novel’s surname Archer), an L.A. private eye, hired by the man’s wife to find him. At first we don’t even know why he has gone missing. The film’s title sequence tells us all about the character of Harper. He is living in his office, and not living particularly well. He is sleeping on a fold out couch and the alarm goes off but he takes his sweet time to do anything about it. Once he gets up, he improvises a filter for the coffee maker, but he has no coffee to make, so he has to dig the grounds from the day before out of the garbage to be able to get his morning cup.

He takes the two hour drive north to “Santa Theresa” , where his appointment with the wife is. We are going to drop several; names in this post so get ready for a lot of character credits. Lauren Bacall is the crippled wife of the missing man. She does not particularly care about him, but she does want to outlive him and know what is going on. Like a lot of movies from the era, this film is all about character and plot often takes a back seat to the people we meet along the way. There is a nosy butler listening at doorways and an officious maid who looks down on Harper as the hired help, not really deserving of guest treatment.

Rich Ralph Sampson, the missing man, not the NBA great, has a personal pilot, an attorney and a daughter that all play suspects or red herrings in the story. The pilot is played by the very handsome Robert Wagner, and for the first half of the movie he seems to become a side kick to Harper, following him from location to location as he tracks down clues and interviews witnesses and suspects. The attorney who hired Harper for the Sampsons is Arthur Hill, a reliable presence in the 60s and 70s, but unfortunately he is frequently cast as the duplicitous type, so his appearance raises red flags everywhere.

Strother is another side character that Harper interviews. “Claude” is a charlatan cult leader to whom the missing man has given a mountain top location for his ministry. As usual, the dialogue he utters is complicated and just slightly odd. It sometimes sounds strange to hear the hillbilly accent accompany the elegant phrases that he so grandiosely delivers. There are three scenes that he appears in, the first and longest is basically a running conversation as they do a walk and talk around the property. The hippy new age trappings m 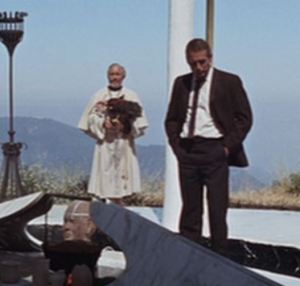 ake his mysticism sound even more bizarre. The property is indeed at the top of a mountain and it makes for some spectacular vistas as he and Newman joust in their conversation.

Claude: [as Harper is checking out the “Temple in the Clouds”]” I know you think me a charlatan. I can only say that if you were correct, then death could not claim me too quickly. You obviously have some strong connection with the Sampsons. Don’t deride me to them, I beg you. The gift of this temple was the beginning of my life. I know to you I look ridiculous, but I only want to increase the amount of love in this world. Where is the harm?”

Earlier in the story, Harper meets an acquaintance of the missing man, a woman who for a time was a starlet but is now an alcoholic gone to seed. Shelly Winters must have been one of the most self aware actresses of her day. She started her career as another blonde looker but readily took parts that acknowledged her having ballooned up in looks from the early days.

Lew Harper: [asking about Fay Estabrook] She used to be a pretty hot young starlet. What happened to her?

She gets called fat at least two more times during the film and she has some unflattering but still realistic eating and passed out scenes where we learn exactly what happened to her.

Robert Webber is her husband, and it turns out he is partners with “Claude” in a side business. While he is a villain in the piece he is not the kidnapper. He does however get to torture heron addict and chanteuse Julie Harris. Strother returns here for a henchman’s comeuppance.

At one moment he is a grinning sadist but when his boss gets shot and the tables are turned, he silently switches quickly into a comforting bystander, as if he had no part in the horror that was just taking place. 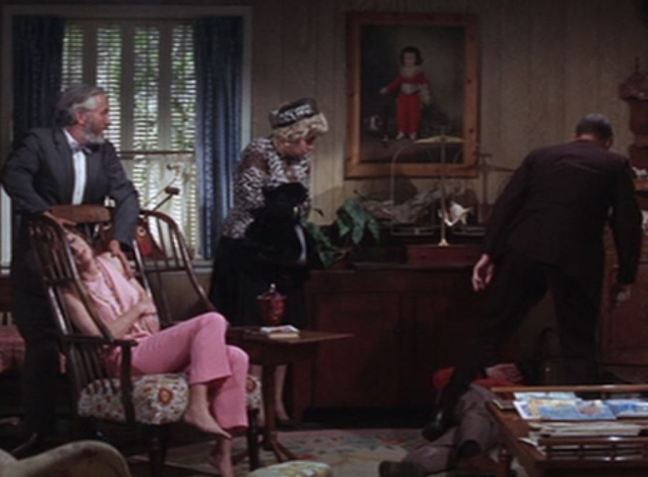 The weaselly nature of the character was suspected earlier but here it is in plan sight and Newman pistol whips him across the face for it.

janet Leigh and Harold Gould are also in this film. Leigh is Harper’s soon to be ex-wife, her role has absolutely nothing to do with the story but is does give us more character bits for Newman to play. Fellow character actor Gould plays the feckless sheriff that Harper avoids and insults on a regular basis. Roy Jensen, an actor that I recognized immediately from “Chinatown”, is another henchman and he gets a series of politically incorrect taunts about his sexual identity thrown at him by Harper.  Interestingly he plays a character  named Claude in that masterpiece.

No one will assume that this movie is a masterpiece but it is a diverting mystery with an eclectic bunch of characters, including the weird high priest of the Temple of the Sun.

CineMaven's ESSAYS from the COUCH

A cinematic prescription for the Classic Filmaholic

80s Nostalgia Central: A Kirkham a Movie A Day Project

H.B. Walsh is a Science Fiction and Fantasy novelist, focusing on dystopian and supernatural landscapes. She is the author of "The Prophecy" series.

A great place for talking about movies!

Diary of A Movie Maniac

A Personal Journey Through Cinema & Television

Spread to the Edges

filling in the gaps for film

Prowler Needs a Jump
World news, movies, TV, and beyond !

It's not a blog, it's just life

What we've got here is failure to communicate

Horror, action and exploitation movies that aren't really awful at all.

Movie reviews every so often

Watch a film. Talk about a film. Films. Love 'em.

What we've got here is failure to communicate